A Memorial Miner’s Statue was Unveiled in St Just

A memorial miner’s statue was unveiled in St Just last night as part of a fundraising concert. This project was ambitious when thought of around a decade ago and costs have always made it not quite in reach. If you want to read my previous blog on the project visit Miners Statue for St Just.

So, the project is reaching the final stages. The 7 foot miner is made. Arrangements are in place for it to be cited where local people preferred, the entrance to Geevor Mine. It will give a huge lift to the rather shabby entrance and if the money can be raised, the statue will be a feature of a memorial garden for people to come and reflect on the lives and the deaths of those hard rock miners that are part of Cornwall’s history. 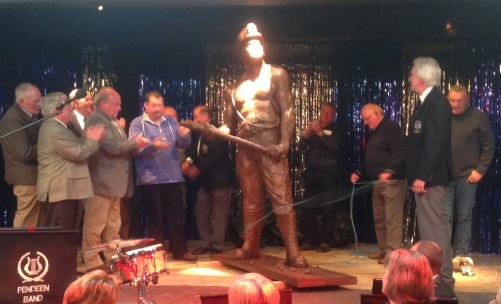 The concert last night featured St Buyran Male Voice Choir, Pendeen Silver Band and Cape Singers. The Old Town Hall in St Just was absolutely packed and the £5 entrance ticket was wonderful value for money and will have made a good financial contribution towards this final leg of the project. I would ask readers to consider helping bring this project to fruition within the next 12 months and here is how:

Just in case you struggle to read the next fundraising event, it is an auction of art, sports and mining memorabilia at the Queen’s Hotel on 25 September at 7.30 p.m. Spread the word!!

Tags: Geevor Tin Mine, St Just Miners statue
Posted in Blog | Comments Off on A Memorial Miner’s Statue was Unveiled in St Just